Patriots had to be patient to get their hats and T-shirts | News, Sports, Jobs 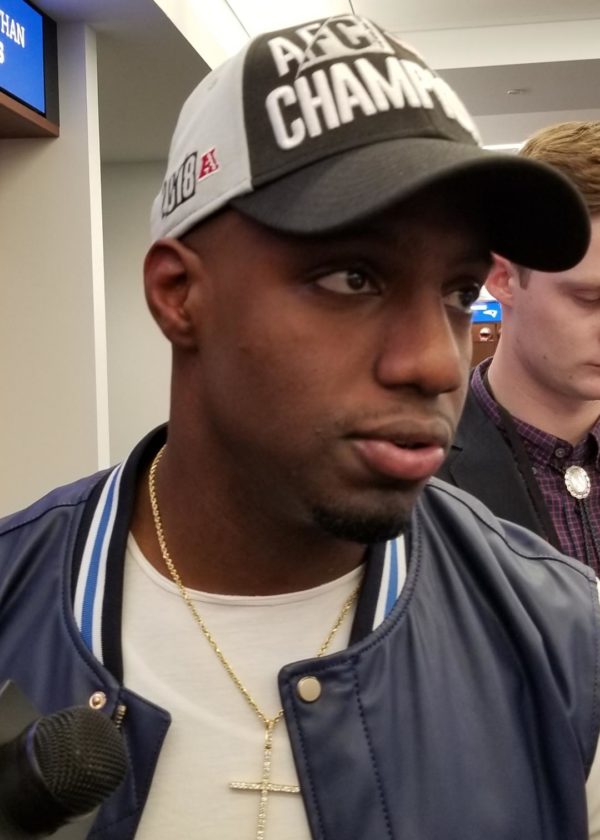 Staff photo by TOM KING Patriots safety Duron Harmon talks to reporters wearing an “AFC East Champions” cap that the Patriots earned with a 24-12 win Sunday over the Buffalo Bills at Gillette Stadium.

FOXBOROUGH, Mass. – Sunday, as it turns out, was Hats and T-Shirts Day for the New England Patriots.

They clinched their 10th straight AFC East title with Sunday’s 24-12 win over the hapless Buffalo Bills, which ties them with the Atlanta Braves as the only teams in the NFL, MLB, NHL and NBA to win 10 straight division titles.

Does it ever get old?

“I think they’re all pretty tough,” Patriots quarterback Tom Brady said. “I think we just have grinded it out. I think part of playing in the NFL is over the course of 16 weeks, you see how things shake out – not after September, October, November. It’s really after the end of December. We’ve still got one hugely important game left and we need to finish strong.”

That would be against the New York Jets, and a win could clinch at least the No. 2 seed and a first-round bye.

But it took a few weeks – losses to Miami and Pittsburgh delayed things.

“This one feels a little different because we had the opportunity the past two weeks to wear these hats and these t-shirts,” Patriots safety Duron Harmon said. “It just shows the resilience in this group not to fold under pressure and just continue to come to work each and every day. When things don’t go your way, never quit, never fold, and just keep fighting until it does.”

Some Patriots haven’t tasted this success, like starting corner Jason McCourty, twin brother of Patriot veteran safety Devin McCourty, who has known nothing but hats and T-shirts throughout his career.

Thus he’s happy for his brother.

“I’m ecstatic, man,” McCourty said. “We’ve been telling him for three weeks now that we’re going to try to get him a hat and T-shirt. So I was happy it came through and he played great today – interception, forced fumble down by the end zone – really two key plays that helped us win the game.”

“It feels good,” said Patriots receiver Julian Edelman, who caught six passes for 70 yards and a TD. “Any time you go out and win the division that’s big. It’s an accomplishment for this team, we’ve put a lot of work into this and we’ve got to go out and keep on improving because there’s a lot of meat on that bone left.”

The NFL Network reported on Sunday that Josh Gordon had “multiple violations” of his league-mandated substance abuse after care. The report also said that it is still possible that Gordon could be reinstated at some point during the 2019 season if he convinces NFL Commissioner Roger Goodell that he has made strides in his recovery.

Gordon was suspended by the league Thursday, the announcement coming hours after he had announced he was leaving the Patriots for mental health reasons.

Fox’s Jay Glazer reported Sunday that Gordon did not test positive for marijuana and that his ban is not a lifetime one. ESPN reported that Gordon gave the Patriots’ security team the slip during the mid-November bye.

When Patriots coach Bill Belichick was asked how hard it was for the Patriots to adjust their game plan after word broke on Thursday they would be out arguably their best receiver, he said, “Again, it’s the National Football League. Unfortunately there’s an attrition in this league, for one reason or another, and when it happens then it creates opportunities for other people.

“Again, I think we have a team that has good depth. We had a lot of players that maybe got a little more opportunity today and they stepped up and tried to make the most of it.”

Adrian Clayborn was signed by the Patriots as a pass rushing specialist from Atlanta in the off season, but on Sunday he was a healthy scratch, heading the team’s inactive list.

Harmon on the irony of QB Nick Foles and the Eagles, who beat the Patriots in last year’s Super Bowl, helping them get in position for a bye with a comeback win over Houston on Sunday:

“Thank you Nick Foles for getting the win, but I’ll take our team against anybody,” he said. “Nick Foles plays his best ball in December and he’s a competitor. We’ve seen that in the Super Bowl, we’ve seen it leading up to the Super Bowl … We know the type of player he is and now he’s doing it all over again. Like I said, thank him for leading that offense today and especially on that two-minute drive. That takes guts. … We’ll definitely take it.”

Atlanta Braves might have a familiar trade option for the outfield
Braves News: Ronald Acuña, trade rumblings and more