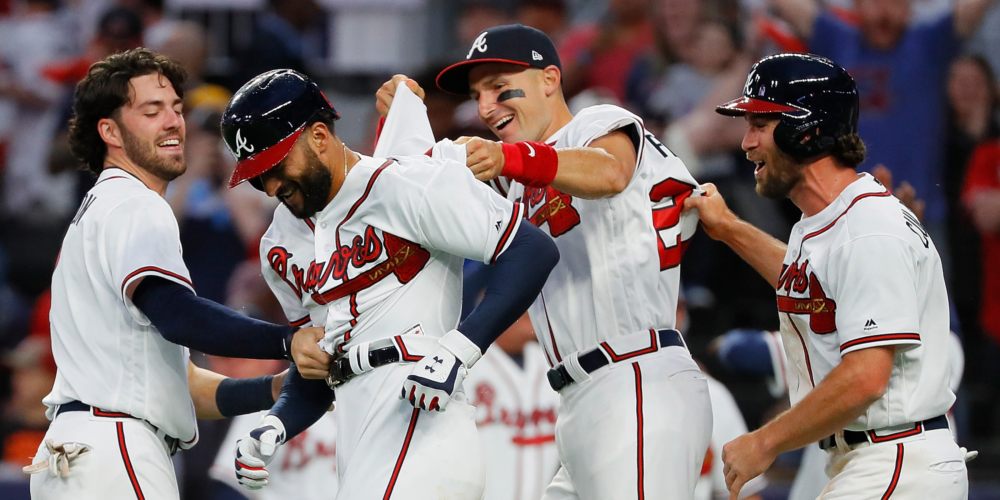 The rebuild in Atlanta is nearing its end for the Braves.

The 2018 season caught just about everybody by surprise, as the Braves ran away with the National League East title and literally reversed their record in a matter of 365 days (72-90 in 2017, 90-72 in 2018). The long-awaited road to the top of the division was a long and tough one to travel, seeing franchise faces go in a number of shrewd trades and enduring three 90-loss seasons in a row. The risky trades, paired with the dominant run on the international free agent market, proved fruitful as the Braves emerged from the rubble to establish themselves as a force to be reckoned with for the foreseeable future.

A few of these trades brought the Braves some of the strongest assets of their surprising season. For example, sending Simba (Andrelton Simmons) to sunnier pastures in Anaheim brought us Sean Newcomb, who established himself as a cemented rotation piece, coming one strike from a no-hitter and posting a 3.72 ERA in his last six starts of the year; not to mention his 1.93 ERA against the Dodgers in the NLDS.

Former GM John Coppolella started paving the road to success before his permanent ban from baseball. Alex Anthopoulos, the new face of the front office, was tasked with finishing the construction. AA has already made exceptional headway, acquiring former Orioles arms Kevin Gausman, Brad Brach and Darren O’Day before this year’s trade deadline. The former Baltimore hurlers posted a combined 2.19 ERA (excluding the injured O’Day) once heading over to Atlanta, pushing us further to our division title and showing a bright upside to the new GM and his judgment on properly structuring the present and future Braves.

The qualifying offer deadline has come and gone with only one player taking their respective deal, Los Angeles’s Hyu-Jin Ryu. One of the biggest seasons of free agency is officially underway and it is time for the Braves to get work done off the field. With a slew of prospects and an estimated payroll of $80.5 million, Atlanta has the potential to be big players this offseason.

The major holes to fill lie at catcher and right field, which ideally includes a power bat to fill the 4-spot behind Freeman, while the team will also desire to upgrade at starting pitcher and closer. The options are limitless, it seems, but it is ultimately up to AA to decide who exactly can fit these needs. With the widest range of off-season availability in the last few years showing itself, AA has plenty to choose from.

Kurt Suzuki is on the free agent market, and it appears unlikely that the Braves will re-sign the veteran catcher. This leaves a huge hole to fill for Atlanta. Suzuki’s bat was an asset to the Braves’ impressive run, slashing .271/.444/.776 in his last year with Atlanta. Tyler Flowers remains signed until 2020 with Raffy Lopez as the current backup. Considering Lopez’s numbers over the last few years (.184/.332/.592), the Braves need a strong option to assist Flowers behind the plate. While Chirinos and Ramos prove good fits for Atlanta, being low-cost and controllable with positive offensive upside, it seems for the time being that AA’s number one option is Miami’s J.T. Realmuto.

J.T. was the light in the bleak Marlins offense, slashing .277/.484/.825 with 21 home runs and Silver Slugger honors on the season. Anthopoulos attempted to trade for the Miami backstop last offseason—and again this July—but Miami’s asking price was far too high. Considering any deal last winter from Miami included Acuna and any deal this July would’ve cost Soroka and Riley, it was easy to say no. Acuna is an easy no then and now, but according to Mark Bowman, just about everyone else appears to be fair game now; with an obvious exception, of course.

With the prospect depth the Braves have and the desperation by the Marlins for strong, young talent, especially in the rotation and bullpen, a deal for Realmuto makes sense and could very well happen for the Braves.

The 2018 season began for the Braves in the way that would set the tone for the rest of the year—with a walk-off home run by right fielder Nick Markakis. Nick had one of the best seasons of his impressive career, earning his first All-Star Game berth and taking home both Gold Glove and Silver Slugger honors. The strong asset to the Braves’ success was not offered a qualifying offer by the team, making the fan-favorite a free agent. While re-signing Markakis would give the club the veteran presence the Baby Braves need as well as adding the potential for a repeat of last season, the Braves are seeming to want to explore other options for the corner. One of these options is the biggest name in free agency this season, Bryce Harper. Now, AA already stated that he’s wary of making the 10+ year deal, but Bowman shared a different view on the potential option.

Don’t get me wrong—having a strong, five-tool player like Harper would be huge for the Braves and their quest to conquer the east for years to come, and it would be both beneficial and exciting to see AA work around Boras for a deal; but seeing as the Braves are just now entering their prime, it would make more sense to sign less expensive players with similar potential to an upside while keeping a larger window of payroll open for future seasons. One player that comes to mind in this category is Michael Brantley.

The outfielder from Cleveland is coming off a strong, injury-free year, posting a .309/.468/.832 slash line that helped Cleveland secure its place back in the playoffs. Brantley, 32, has a consistency with the bat and solid defense that could be a huge upside for the breakthrough Braves. There’s only one issue: Brantley has a bad history with injury. Missing most of 2016 and a majority of 2017 with a shoulder injury is certainly tainting his free agent value. However, Brantley’s 2018 injury-free campaign may be a good enough sign to move forward should AA decide to pull the trigger.

The ace out of Cleveland is the topic of major off-season trade rumors, as the Indians announced the openness to trade a majority of their team. With the high-level prospects the Braves possess, like Mike Soroka, Kolby Allard, Kyle Wright, and Austin Riley, a deal could be likely between the two. However, a potential deal for the superstar hurler might have to include Ender Inciarte, per reports. This is a high-risk, high-reward rumor, but Kluber at the front of the rotation could give the Braves the push through future post-seasons that they’re desperate to see.

Atlanta’s former superstar closer is back on the market after declining his qualifying offer from the Red Sox. After losing Kimbrel to the Padres in the trade that brought Matt Wisler over, the Braves have been lacking in the bullpen department, with the exception of Arodys Vizcaino, of course. Kimbrel struggled a bit with the Red Sox but stayed strong enough to keep his closer position and earn himself a World Series ring. A reunion with the Braves would give them the bullpen help they’ve been searching for at a very comfortable price.

After being traded from the Tampa Bay Rays at the trade deadline this year, Eovaldi proved himself to be a strong, dependable starter, posting a 3.33 ERA with 48 K’s for the Red Sox; not to mention his stellar post-season performance (1.61 ERA, 16 K’s). Eovaldi is on the market this off-season and has the velocity, consistency, and control that the Braves are looking for in a rotation booster, at a controllable price (could potentially go for 4 years, $60 million).

One of the highlights of the Braves’ trade deadline, Brad Brach bolstered the Atlanta bullpen in the second half of 2018, posting an impressive 1.52 ERA with a 269 ERA+, seeming to turn it right around once landing with the Braves (4.85 ERA, 86 ERA+, -0.1 WAR with Baltimore). Re-signing Brach makes perfect sense for the Braves, considering his consistency in the bullpen for Atlanta and his potential low-cost, which is a huge plus for AA when considering acquisitions. Adding back Brach may give Atlanta the closer they need with the added bonus of more room in the payroll to acquire more of our needs or potential upgrades.

25% off! Get your’s today while this deal still lasts!

what can Braves fans expect from a Julio Teheran trade?
Brian Snitker of Atlanta Braves named NL Manager of the Year