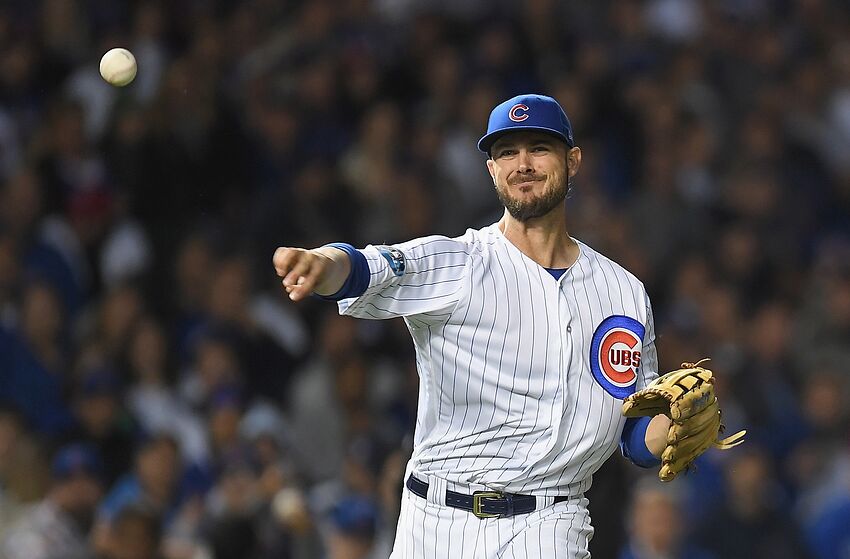 CHICAGO, IL – OCTOBER 02: Kris Bryant #17 of the Chicago Cubs throws to first base in the eleventh inning against the Colorado Rockies during the National League Wild Card Game at Wrigley Field on October 2, 2018 in Chicago, Illinois. (Photo by Stacy Revere/Getty Images)

The Atlanta Braves have one of the best farm systems in baseball and are open to the possibility of trading for another star player this off-season. Could Kris Bryant prove to be a good fit in Atlanta?

The chances of Kris Bryant being traded seem to be very slim, but it is a trade the Atlanta Braves must attempt to explore. Bryant would fit the Braves shortcomings perfectly. He would solidify a solid lineup and be in Atlanta potentially longterm.

Bryant would bring a lot of power to the Atlanta lineup, one of the shortcomings offensively for Atlanta. He would offer the team another right-handed bat to slot towards the top of the lineup. Offering Freddie Freeman protection and affording the team to keep Ronald Acuna Jr. in the leadoff role.

Bryant is coming off of his worst season to date, he struggled to stay healthy often hitting the disabled list. Normally a 25-30 a year homerun hitter Bryant managed only 13 homers, along with a career-worst .272 average.

If there was ever a chance the Cubs would consider trading Bryant the time is now. The Cubs have made it clear every player is on the table when it comes to trade offers. Still, it would take an astronomical deal from the Braves to make the Cubs even consider parting with Bryant.

The more likely move for Atlanta is sticking with their current infield alignment or adding a free agent like Josh Donaldson.

Bringing Kris Bryant to Atlanta is likely a pipe dream for a team unlikely to mortgage their future at the expense of one player.

Yet it is an intriguing fit that Atlanta will almost certainly attempt to explore this off-season. Bryant sitting in the middle of the lineup and anchoring the hot corner would certainly push the Braves into the top three National League contenders in 2019.

Next: Browns Vs. Falcons Predictions

But for Atlanta the question will be, how much are they willing to spend trying to win now?

The Atlanta Braves have struck quickly, but now are blocked. – Tomahawk Take