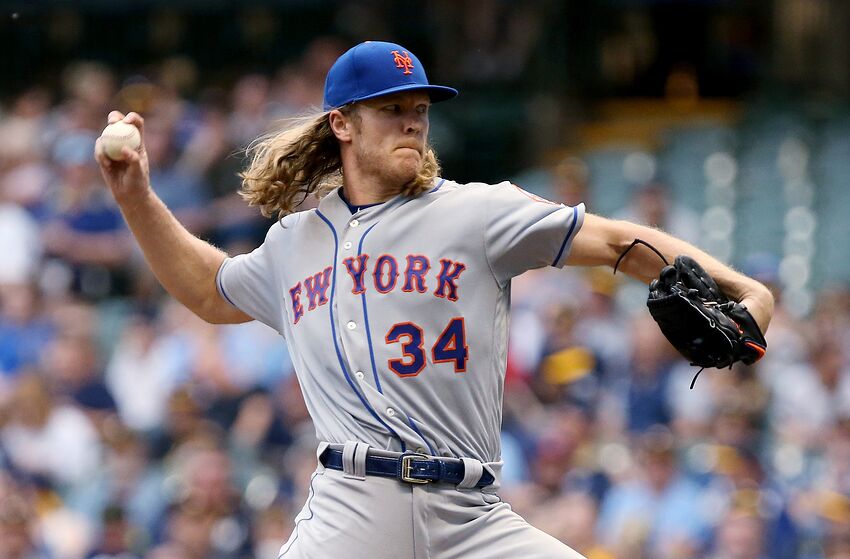 MILWAUKEE, WI – MAY 25: Noah Syndergaard #34 of the New York Mets pitches in the first inning against the Milwaukee Brewers at Miller Park on May 25, 2018 in Milwaukee, Wisconsin. (Photo by Dylan Buell/Getty Images)

The Atlanta Braves are in need of an ace pitcher, a pitcher to slot ahead of Mike Foltynewicz in the rotation. There is no better option on the current trade market than Noah Syndergaard. Could the Mets ace end up in Atlanta?

Times in baseball are changing, no longer are blockbuster trades surprising. For the Atlanta Braves, they have become an off-season norm for a team focused on building their future. Teams shuffle around players and roster spots as if they were running their personal fantasy team.

It is only in this baseball culture a player like Noah Syndergaard could hit the trade market. With the Mets looking to rebuild their roster, Noah could be on the move.

Syndergaard in Atlanta is an interesting thought that would make a lot of sense for Atlanta. We have seen in seasons past the Braves and Mets are willing to deal despite playing in the same division.

Noah Syndergaard in Atlanta would leave the Braves only two obvious holes to fill. They would need corner outfield and a better arm in the back end of the bullpen.

This past season Syndergaard had a 3.03 ERA and started 25 games for the Mets. While his season was shadowed by the Met’s struggles it was a nice bounce-back year for a player who has a dynamic ability.

Syndergaard has great velocity and is a clear top of the rotation pitcher, the problem is obvious, however, how much would he cost?

It seems likely the Mets will demand a ransom for a pitcher who is just entering what should be the prime of his career. Trading him for nothing less than four top twenty prospects and possible Major League ready help seems probable.

Dealing three top twenty prospects and a player like Julio Teheran could be an offer the Braves are willing to make. Anything higher will likely keep Noah out of the Braves price range.

Regardless Syndergaard is a perfect dream fit in Atlanta. A fit that would push the Braves over the top making them a serious National League contender in 2019.