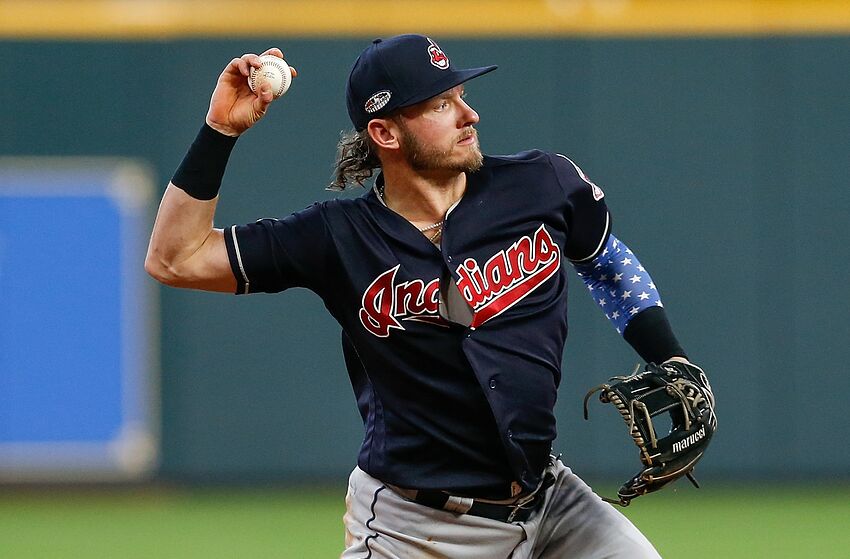 HOUSTON, TX – OCTOBER 06: Josh Donaldson #27 of the Cleveland Indians throws out a runner at first base in the second inning against the Houston Astros during Game Two of the American League Division Series at Minute Maid Park on October 6, 2018 in Houston, Texas. (Photo by Tim Warner/Getty Images)

What Milestones Can Atlanta Falcons Players Set? by Reeves Guyton

The Atlanta Braves off-season has ground to a quiet halt with the team making minimal moves in what has been a busy off-season around the League. Are the Braves done after their two signings early on?

Watching the Atlanta Braves off-season has been boring so far for fans hoping the team will gear up for an attempted World Series run. After the blockbuster signings of Josh Donaldson and Brian McCann to kick off free agency, the Braves have been bystanders.

For a team with plenty of holes to fill it has been a frustrating quiet for impatient fans. Still, the Braves are making the right decision exploring every single option and quietly waiting for the right move to emerge.

With holes in the bullpen, rotation, and outfield the Braves have no shortage of possible moves. For the outfield, they could attempt to bring back the same faces as last season, target a top of the market right fielder, or simply go with a trade option or cheap platoon to fill the void.

Equally the rotation and bullpen are full of options with a treasure trove of young starters ready to make the rotation or be used out of the bullpen.

Atlanta showing patience waiting for the right moves to make is the right decision regardless of their impatient fans. With young players set to improve in 2019 the Braves will already be getting a roster boost.

Along with the additions of Donaldson and McCann, this roster is ready to take a step forward as is. What the Braves have to decide is whether or not they are ready to push all their chips in on 2019.

Next: Who Falcon’s Fans Should Cheer For in NFL Playoffs

If so more moves will come as the team attempts to bring a World Series to Atlanta for the first time since 1995. More to come as the Braves off-season continues to develop.