The Atlanta Braves crashed out of baseball’s playoffs on Monday, but the team’s owner says their $700 million real-estate development surrounding their new ballpark has been a hit for fans and the city.

The development, which includes an Omni Hotel, the

and Thyssenkrupp Elevator, opened in 2017.

The owner says that taxes and other income generated by the site are helping offset some of the county’s costs incurred by the Braves’ controversial $672 million suburban stadium, where the team moved last year after close to two decades in downtown Atlanta’s Turner Field.

, projected in August that it would make a 22% return from its sale of the three apartment buildings in the complex.

“We have a pretty strong vested interest in making this thing successful for a long time,” said Derek Schiller, the Braves’ chief executive.

If the Braves succeed, the new SunTrust Field and adjoining development could serve as a new formula for how commercial property can help finance sports stadiums and arenas.

The traditional approach, where teams rely primarily on public subsidies, has fallen out of favor after enormous taxpayer burdens from developments like the Paul Brown Stadium, home of the Cincinnati Bengals.

“The historical model is shifting towards the ancillary development of mixed use projects,” said Andrew Zimbalist, an economics professor at Smith College who has written extensively on the impact of sports venues.

Other teams following the Braves’ playbook include the Texas Rangers, which have joined with Cordish Cos. of Baltimore to develop an entertainment complex, hotel and convention facility near the new Globe Life Field scheduled to open in 2020. The Milwaukee Bucks are planning a 30-acre mixed use development including hundreds of apartments and office space around the Fiserv Forum, which opened in September.

Even with real estate, taxpayers still foot a big part of the expenses. Wisconsin Gov. Scott Walker in 2015 signed a bill to allocate $250 million to Fiserv Forum, about half the arena’s total cost. Cobb County, the location of the Braves’ new stadium, issued $376 million in bonds. Voters in the city of Arlington, Texas, agreed to contribute $500 million to the Rangers’ new stadium.

“If you build a stadium that doesn’t have anything there but a stadium, it doesn’t help the local economy,” Mr. Zimbalist said. “If you start generating other investment, then it could help.”

The cost to Cobb County for SunTrust Park from debt service and other expenses comes to $9.5 million annually, according to a study by Georgia Tech’s Enterprise Innovation Institute released in September. But the resulting increased tax collections and other benefits from the field and surrounding economic development exceeds that by $18.9 million a year, the study said.

“Does this level of guaranteed private investment change the calculus for the public financing of the stadium?” asks the study, which was done on behalf of the Cobb Chamber of Commerce. “The answer is ‘yes.’”

The Braves move to SunTrust Park last year remains controversial in Atlanta, which was stunned by the team’s move. While Turner Field has been repurposed for college football—home to the Georgia State Panthers—city residents still say that the area continues to suffer from the loss of businesses.

Braves executives said they moved to be closer to their fan base and that the Cobb County site was far superior for traffic, parking and real-estate development. But they acknowledge that SunTrust Park and the surrounding development have shifted dining and entertainment out of Atlanta.

“We have friends in Buckhead,” one of Atlanta’s upscale neighborhoods, said Mike Plant, chief executive of the Braves Development Corp. “We hear from them. They’re not real happy.” 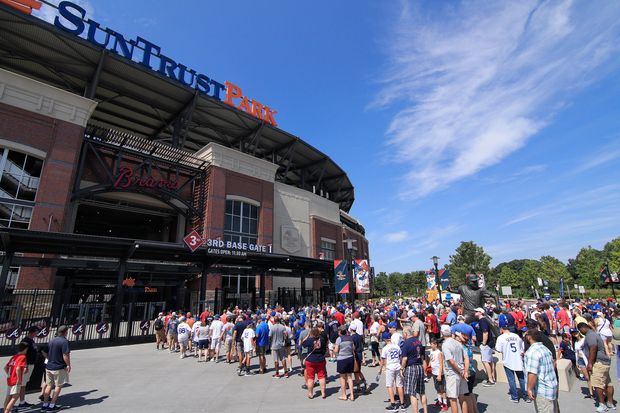 Fans lined up to see the Los Angeles Dodgers and the Atlanta Braves in July at SunTrust Park.

The performance of the SunTrust complex helped boost the Braves unit of Liberty Media’s revenue to $182 million in the second quarter of 2018, compared with $176 million in the same period last year. The Braves tracking stock, which plunged over 44% to below $20 a share its first day of trading in the spring of 2016, is now above $26.

Executives at other teams say that they’re also looking for a good return on their commercial real-estate developments. But some say that’s not the only consideration.

“The objective isn’t a double digit rate of return on real estate,” said Peter Feigin, president of the Milwaukee Bucks. “We have an extreme interest in the betterment of Milwaukee.”

The Green Bay Packers has taken a similar approach to the real-estate development the team has started to finance around Lambeau Field in a new 45 acre community that the team has named Titletown. The first phase included a park, ice skating rink, sledding hill, and restaurant-brewery.

Earlier this month, the Packers announced a second phase that will include an office tower, rental apartments and single family homes. “We’re the smallest market in any major sports,” said Ed Policy, the Packers chief operating officer. “We need to be much more in tune with our community and our economy.”

MLB playoffs 2018: The Braves are so loaded that I’m nervous for them
Atlanta Braves 2018 minor league review: right-handed relievers